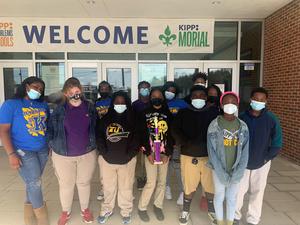 The pressure was on at Tulane University’s Winter Debate Tournament, but KIPP Morial Middle School’s Debate Team was ready to argue.

Markuisha Patton, the team’s coach said. “When Morial won, I was excited and overwhelmed – but (I was) planning strategically how we would get stronger to win the next competition.”

This is Patton’s first year leading the 14-member debate team after it disassembled during the pandemic. “The debate team started from a conversation in history regarding Abraham Lincoln's decision to emancipate the slaves based off generosity or military strategic,” she said. “Students were invested into the debate and wanted to argue other topics. I came up with a few history topics to further expand scholars' minds and we began to argue amongst each other.”

Delorionne Freeman, an eighth-grader, said she was anxious to participate in her first tournament after long hours of research and studying tough topics.  “I wasn’t scared. I was excited because the practices were fun and I wanted to put my skills to the test,” Freeman said. “I like to debate and argue with people.”

“We can tell!” Tonae Hilliard, 13, chimed in. “And she does an amazing job. She argues very strong and consistent. That is important on a debate team.”

The team debated several topics that required extensive research such as “Does Social Media Do More Harm Than Good,” “Should Mardi Gras Routes be Consolidated,” Is Radicalism Preferable to Incrementalism to Bring Social Change” and “Should Teachers Wear Uniforms.”

“I knew that our debate team had the skills to discuss and elaborate on topics,” Patton said. “I was nervous because it was their first competition, we have only been together for two months and they weren't only competing against their peers.”

Patton sought out fast-thinking students that can “vocalize thoughts and expressions, had great leadership skills and were willing to research and practice” to join the team.

One of the students selected to join was JaQuan Keelen, 12. “This was a great opportunity for me,” Keelen said. “I like to look stuff up and argue back and forth. Social media is my favorite topic to argue about - most people say it is a great thing and it’s really not. I like to prove people wrong.”

Patton believes the debate team allows her students to better express themselves. It also helps develop critical thinking that they can use in and outside of classrooms. Their competitive energy convinced her that they were ready for competition beyond Morial’s walls.

“The debate team chose Tulane’s tournament to continue the already established relationship between KIPP Morial and Tulane” Patton said. “We believe it also exhibited the diverse range of opportunities that a university could provide.”

To be successful at debate and secure a tournament win, Bryant Tardy, 13, believes organizing ideas, studying the opponent’s rebuttal and focusing on topics are key. “Sometimes you get put on the side you don’t want to be on – so it’s challenging,” Tardy added. “I have to do my research, focus, study the topic and research and research.”

Charlise Washington, 13, agreed. “Competing against different teams helped us improve our skills while building our relationship as one team,” she said. “We also encouraged and supported the other teams and studied their approaches for insight.”

Although the tournament is now over, the team is focused on its next opportunity to debate. Patton said the team will continue to practice, debate and hopefully expand.

“We were relieved after we won the tournament because we all put in so much effort,” Bryant added. “We were so excited when we won, but we have to improve, and we have to work harder for our next tournament.”