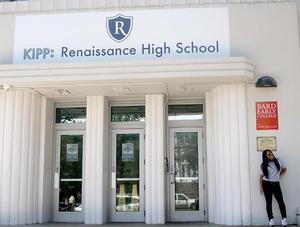 In a classroom on the third floor of KIPP Renaissance High School (KRHS), students energetically engage in a lively discussion regarding race and academic expectations. As each scholar answers, the instructor probes their thought process, encouraging them to deepen their answer or add broader context to it. In turn, the students expound and expand on each other’s opinions, give compliments, or respectfully disagree and offer alternative ideas. Though this classroom is set inside a high school, it is actually a full-credit college course taught by a full-time faculty member and offered through Bard College. It is one of several classes available as part of a degree-granting program to KRHS students who are enrolled in Bard Early College Academy at KIPP Renaissance (BECA).

BECA is a program designed to allow KRHS scholars to graduate not only with a high school diploma, but also with an associate’s degree in humanities — free of charge.

Bard Early College Academy at KIPP Renaissance is the first program of its kind in the country where a college has established a degree-granting satellite campus within a high school.

“It’s a project that is very much of the moment, given the national attention around school reform,” said Stephen Tremaine, vice present of Early Colleges at Bard College. “To create one space for both high school and college is an interesting and powerful thing at a time when we want to see more students of lesser means going to college.”

BECA offers KRHS students a chance to earn 60 college credits in two years, many of which are transferable to other institutes of higher learning. This allows scholars to get a jump start on their four-year degrees by saving time as well as money.

“There are a lot of conversation about where to go to college, but not when. If you talk about when, you can significantly change who goes to college,” Tremaine said. “When we bring a top-tier liberal arts education to teenagers—instead of having them come to us—and we do it without cutting corners, it opens up a lot of opportunities for these scholars.”

KIPP New Orleans Schools (KNOS) and Bard have a partnership that goes back to 2011, when Bard opened an early college, non-degree-granting program in New Orleans that offered a half-day of college classes to students from high schools across the city.

However, when the school leaders at KRHS sought to transform their academic programming, it seemed the perfect time to create a revolutionary experience for scholars that expanded beyond the existing partnership.

“When we began rethinking the instructional program at KIPP Renaissance, we wanted to do something transformational and big in our city,” KRHS School Leader Towana Pierre-Floyd said. “We started really examining our core question: What does excellence look like? It isn’t just asking more of our students; it’s striving to be the North Star, and what should our North Star be?”

At the same time, the people at Bard had been forming ideas about a different model for Bard Early College.

“We were working in New Orleans for a long time, and KIPP Renaissance was in transition. We reached out to Towana, thinking it would be totally crazy to do something like this, and she was like ‘it’s a great idea; consider it done!’,” Tremaine said. “We expected resistance and we found quite the opposite and were committed within an hour of talking to her.”

Currently the course work at KIPP Renaissance is designed so that students can complete the majority of their high school-specific course requirements in the first two years, allowing them to then decide between two rigorous paths: BECA or the AP Capstone diploma with a Career and Technology Education (CTE) Pathway of either pre-engineering, digital media, or skilled craft.

To preview the BECA program for underclassmen, Bard faculty collaborate with ninth and tenth grade teachers to introduce them to the college-level inquiry and discussion, so that all KRHS students receive exposure to what a Bard classroom may be like. They also experience an English class co-taught by a KRHS teacher and a Bard professor.

At the end of their sophomore year, each student, along with their family, makes a decision regarding their pathway of study and receives an individual action plan based on that decision.

“We genuinely believe every student has the opportunity to have a choice,” Pierre-Floyd said. Destini White was one of the sophomores last year who chose to apply to Bard.

“I was intrigued by the idea of earning an associate's degree while also earning my high school diploma,” she said.

“Although Destini was a KIPPster since sixth grade, she had her sights on Ben Franklin. Hearing about the Bard program at Renaissance's Open House allowed us to make the decision that KIPP Renaissance was the high school for us,” Tamika White said. “I've instilled in Destini that she's a leader and to always move as a leader, so why not be a part of the first class at KIPP Renaissance to graduate with a high school diploma and an associate’s degree?”

Destini, along with others who were interested in BECA, had to apply like any other potential college student. The selection process lies fully with Bard and focuses more on a scholar’s potential for growth mindset based on intellectual discourse than their GPA. The program accepts 50 students a year, based on how successfully students navigate a demanding three-round interview and discussion process. In 2018, 60 out of 130 KRHS sophomores applied.

Destini said she found the application and interview process to be very rigorous.

“I was placed in an unusual atmosphere, but I was very curious for what would lie ahead,” she said.

As part of the process, students are given a text to read and then sit down with 16 other applicants for a 90-minute seminar with a faculty member.

“We think applying to college needs to be about self-selection and not just institutional gatekeeping,” Tremaine said. “Our process allows the applicant to get an up-close and personal sense of what they are getting into and allows the student to make a decision about what is right for them. It also gives us a chance to see them without distraction.

“For us, it’s less of an application and more like a conservatory institute audition: no one there asks what you did in middle school; they want you to play the violin,” he continued. “We want students to play their instrument so to speak, meaning we want them to use their mind and voice that they will need to be successful in their college classroom. It’s not about the quality of their preparation, but the quality of their thought process and potential for growth.”

For the last month, the 50 KHRS scholars who have been accepted into Bard have been tackling the dual roles of being a high school and a college student. For most, the transition has been an incredible experience.

“So far, I’m enjoying these classes very much and the things they offer,” Destini said. “These classes differ from high school classes, because they lean more on the do-it-yourself side of things. Everything is very independent.”

At the moment, college seminar is her favorite class.

“Seminar is my favorite class, because of how open the space is and the energy the professor brings to the class each day,” she said.

“I am the president of our girls club, Ladies of Elegance, president of the Drama Club, a member of our National Honor Society, and I am in the running for vice president of student council,” she said.

The blending of college and high school life could have a lasting impact on the educational scene. The faculty and administrators involved in the program from both KRHS and Bard understand that this experiment not only impacts students currently enrolled in BECA, but could have a ripple effect nationwide.

Of those students enrolled in a Bard early college program nationwide, 90 percent graduate with a two-year associate’s degree. An independent study commissioned by Bard found that its students of color are 37 percent more likely to complete a bachelor’s degree than a matched group of peers. According to a study by the American Institute of Research, students who earned 20 college credits in high school are 20 percent more likely to finish a bachelor’s degree on time. In addition, these programs save money—an average of $22,000—for students and their families, as well as the state and federal government.

“This is an idea of national consequence,” Tremaine said.

On a local level, this program could change the lives of some scholars in a very tangible way.

“Our goal is for our students to graduate with a passport in one hand and 60 college credits in the other,” Pierre-Floyd said.

Destini agrees that attending Bard Early College Academy and graduating with an associate's degree will certainly affect her future in many positive ways.

“I will be able to say I'm a leg up on others students who I will attend a traditional four year college with,” she said. “Also, I believe graduating with my associate’s degree will open doors to a world of opportunities.“

“I hope graduating with an associate's degree will first prepare Destini for her future college experience, and secondly, give her the confidence she need to tackle life's endeavors,” Tamika White said. “I'm excited about the opportunities KIPP New Orleans Schools and Bard College have bestowed upon Destini. With this great opportunity, I'm excited to see what her future holds.”